Day two of the challenge was also successfully completed – although I do think I’ll become a cranky bird soon.

For the second day of this weekend, I made plans to go to the Ari veggie market with Masako. I had told her about the ฿100 a day challenge and that we could either take the bus together or meet in Ari. She understood and didn’t mind taking the bus with me. So, we met up in the morning and took the bus together – bus number 29. The bus ticket was ฿8, which was good. Too bad we got what we paid for: no airconditioning and a driver who thought he was a pirate – literally, he was wearing a head scarf, tied to the side.

The veggie market in Ari looked great this time. Because of the Vegetarian Festival, there were yellow flags everywhere and it looked so festive and bright! The veggie market is there every day from early morning until around 2 or 3 pm. However, because I don’t live to close to the place, I only go there on the weekends. While normally I like to get a bunch of different foods and share, I only got Khao Soi today as it was easier to keep up what I spent on the food I ate. Plus, it’s actually cheaper than getting a bunch of food anyways. It was delicious as usual!

We had a nice lunch and stayed a little while to catch up. After we left the veggie market, we went to Whittard’s – one of my long-time (pre-Bangkok) favourites. But, of course I could not afford anything there – even a tea costs around ฿90! So, I just kept Masako company while she had coffee. She really wanted to buy me a drink, but I explained her my rules about no accepting food (and drink) for free. And anyways, I didn’t mind – I like the place and at least we could sit somewhere with airconditioning. Masako ordered a coffee and we got free water, so that was nice. We stayed for a while and decided to head back as I had some things to take care of and so did she. So, we headed back to the bus stop.

The BMTA (Bangkok Mass Transit Authority) website stated clearly that buses number 29, 34 and 502 run from Ratchathewi (where I live) to Ari and back. So, we hopped on bus number 502, only to find out that: 1. we were the only passengers in the whole bus; and 2. the bus wasn’t going to Ratchathewi. But, they were very nice about it and took us as far down as they could and didn’t even ask for any payment! So, we thanked them and hopped off again close to Victory Monument. Soon, bus number 34 arrived and I cleary asked this time before getting on. The bus driver confirmed and we boarded the airconditioned bus. The ticket was ฿11, but then again, the bus was much nicer and the driver drove well. I actually have friends who refuse to get on a crappy bus because they actually crash a lot more often and they are just uncomfortable. But well, when on a budget, I’ll just have to compromise. Next time, I might just meet friends at the place itself as I do feel a bit guilty about dragging them with me on this basic path (to death?)…!

We arrived at Ratchathewi and Masako showed me her apartment building. She told me I could use the gym and pool for free whenever I wanted as it’s free for guests and I could use her name! Well, I didn’t make rules about accepting free services, but I guess I could do this – it just means access and it’s an extra! Especially since my VIE hotel FIT gym membership ended after the promotion (and they raised the price with 200%!), this is a very welcome situation. I am not sure I will actually use it, but it’s very nice to have the possibility!

I made my way to Siam Paragon as I had to take care of some things regarding the rent and so I walked my way over, which only took about 10 minutes. While normally my rent is lower than my stipend, but I guess I used the airconditioning a lot more this month as my rent was now more than my stipend! So, I had to use my credit card (connected to my home account) to sort this out. When I arrived at the bank they told me that: 1. the machine for processing card payments wasn’t working (and this is at the bank?!); and 2. they would charge me a 3% processing fee. Well, ***** that! So, I had to make my way to MBK, through the crowds that were happily (and very slowly) shopping on this Sunday afternoon. The reason is that in Thailand, there is only one bank that does not charge a ฿150 fee. Most foreigners have to pay some amount to their home bank account when they withdraw money abroad. In Thailand, there’s usually an addition ฿150 fee that goes to the Thai banks! Very unfair, especially when it’s the poorer expats who don’t have Thai bank accounts (what use is it to open a bank account when there is no money coming in to keep it in there?)… So, luckily, there is this one bank, AEON, who does not charge a ฿150 fee for foreign card withdrawals. I really hope they won’t change this policy to match all the others. It’s a real rip off as ฿150 is what someone here could live off for at least a day! 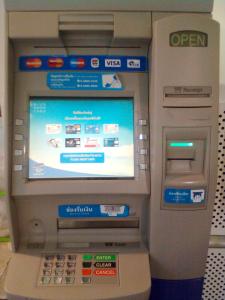 After I got some money from this heaven-sent ATM, I made my way back to the bank in Siam Paragon and I made the payment. The thing is, my landlady lives in Germany, but she is Thai. Therefore, I cannot pay her in cash (which is usually one of the possibilities of rent payment) but I have to transfer the rent to her particular Thai account that is with this particular bank in Paragon. And as I don’t have a Thai bank account (as explained above) to do the online banking, I have to go through this process every month. Today, it took me almost an hour to get it all done and it got me pretty cranky – rushing in the heat between crowds of people while worrying about money and starting to feel hungry…not good for remaining zen…!

After I was done settling the rent issues, it was nearly dinner time and as I was in Paragon, I decided to go to one of my favourite food stalls. It is actually quite cheap (meaning, not super overpriced as most other Paragon-based places) and similar to what I had the day before – but well, it’s weekend!

It’s actually a little more expensive than the street stall I got my taro fritters yesterday, but this one has sweet potatoes! And I love sweet potatoes. So, I got a mix of sweet potato and taro fritters for ฿30. I finished the water I bought yesterday and had tea for the rest of the evening while preparing for the week ahead.

So, today I spent ฿79 in total – even less than yesterday! I do notice I get cranky because I am snacking less. I hope it’s just a fase and I’ll get used to minimalistic living soon…