The Vegetarian Festival (เทศกาลกินเจ) was held in Thailand 27 September – 5 October 2011 (or, the equivalent Thai year of 2554). This annual Festival is the celebration of the Chinese community’s belief that abstinence from meat and various stimulants will help obtain good health and peace of mind. Ironically, my visit to China was the last push towards my vegetarianism back in 2009.

In Bangkok, there were yellow flags everywhere, indicating the sale of ‘เจ’ (jay) food – food free from animal products and strong-smelling herbs. 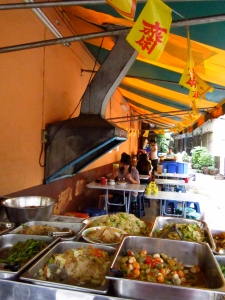 During this festival, participants must observe the following commitments:

Although I wasn’t a ‘strict participant’, most of these commitments were easy to follow. I am vegetarian, so the change to jay food was not too bad. However, from time to time I would still eat food with strong-smelling herbs as I found strict jay food quite bland in taste. I generally try to adhere to Buddhist precepts – not because I am a Buddhist, but because I think they are good values to live by (which also goes for most other religions – I see a clear common core). In addition, I think my ฿100 a day challenge quite suits this – no consumerism, detachment, minimalism… My work is of a charitable nature, so nothing changed there. The only commitment that was quite difficult was the dressing in white as I have no pieces of white clothing in my wardrobe. Then again, it wasn’t necessary as I didn’t participate strictly.

So, the festival was very nice! I think it also helps I was not in Phuket. There, festivities include a procession of ‘ ม้าทรง’ (mah song), which are pure people (unmarried and without families – yay!) who invite spirits of gods to possess their bodies (nay…!). In Phuket, they practice flagellation and self-mutilation (wearing elaborate costumes, they pierce their cheeks, tongue and arms with all kinds of things like swords, machine guns, pins and hooks). It is believed that while they are possessed, the mah song will not feel any pain. Yeah, probably the sight of this would’ve put me off eating any food during the festival, so I’m very happy I just enjoyed part of the festival – in Bangkok!